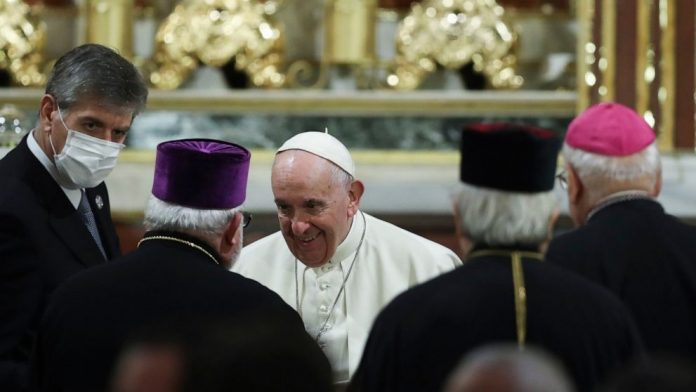 LESBOS, Greece — Pope Francis returned Sunday to the Greek island of Lesbos to offer comfort to migrants at a refugee camp and blast what he said was the indifference and self-interest shown by Europe “that condemns to death those on the fringes.”

“Please, let us stop this shipwreck of civilization!” Francis said at the Mavrovouni camp, a cluster of white U.N. containers on the edge of the sea lined by barbed wire fencing and draped with laundry hanging from lines.

Arriving at the camp, a maskless Francis took his time walking along the barricades, patting children and babies on the head and posing for selfies. He gave a “thumbs up” after he was serenaded by African women singing a song of welcome.

It was Francis’ second trip to Lesbos in five years and he lamented that little had changed since 2016, when Lesbos was at the heart of a massive wave of migration to Europe and Francis brought 12 Syrian Muslim refugees home with him aboard the papal plane.

That concrete gesture of solidarity had raised hopes among the current residents of the Lesbos camp, many of whom have given birth to children here while waiting for their asylum claims to be processed and saw in Francis’ visit a chance at finally getting out.

“It is a grace for us that the pope is coming here. We have a lot of problems here as refugees, a lot of suffering,” said Enice Kiaku from Congo, whose 2-year-old son on her lap was born on Lesbos. But like little Guilain, she has no identity documents and is stuck.

“The arrival of the pope here makes us feel blessed because we hope the pope will take us with him because here we suffer,” Kiaku said as she waited in a tent for the pope to arrive.

But no such papal transfers were announced this time around, though during the first leg of Francis’ trip in Cyprus, the Vatican announced 12 migrants who had crossed over from the breakaway Turkish Cypriot north would be relocated to Italy in the coming weeks. Cypriot officials said a total of 50 would eventually be sent.

Francis’ five-day trip to Cyprus and Greece has been dominated by the migrant issue and Francis’ call for European countries to stop building walls, stoking fears and shutting out “those in greater need who knock at our door.”

“I ask every man and woman, all of us, to overcome the paralysis of fear, the indifference that kills, the cynical disregard that nonchalantly condemns to death those on the fringes!” he said. “Let us stop ignoring reality, stop constantly shifting responsibility, stop passing off the issue of migration to others, as if it mattered to no one and was only a pointless burden to be shouldered by somebody else!”

He denounced that the Mediterranean Sea, “the cradle of so many civilizations,” had become a vast cemetery where smuggling boats packed with desperate people sink. “Let us not let our sea (mare nostrum) be transformed into a desolate sea of death (mare mortuum),” he said.

Sitting before him in a tent at the water’s edge was Greek President Katerina Sakellaropoulou, EU Commission Vice Presidet Margaritis Schinas and would-be refugees from Afghanistan, Iraq and Congo, among other countries.

Addressing the pope, Sakellaropoulou strongly defended Greece’s response to the needs of migrants and thanked Francis for showing his support with his presence.

“It is the strong message of hope and responsibility that is conveyed from Lesbos to the international community,” she said.

The camp, where tents were only recently replaced with containers, is actually a temporary holding center pending the construction on the island of a “closed controlled facility,” essentially a detention camp. These new camps, which are funded by the European Union, are already running on three other Greek islands, Samos, Leros and Kos.

Francis listened intently as one of the camp’s residents, Christian Tango Mukaya, a Congolese father of three, thanked him for his show of solidarity and appeal to Europe to let refugees in. Mukaya lost track of his wife and their third child in their journey and is hoping his visibility with the pope might reunite them.

“We hope that the pope coming can bring change. Change,” he said. “Regarding our condition, we would like a better life. We plead with the pope to help us, to speak on our behalf to Europe, to help us.”

Francis’ visit to Lesbos was the highlight of his five-day trip, recalling his 2016 visit with the Orthodox leadership when he wept at the plight of asylum-seekers packed into a camp that eventually burned down last year.

More than 1 million people, many fleeing war in Iraq and Syria, crossed from Turkey into Greece during 2015 and 2016, with Lesbos the busiest Greek crossing point. The flow may have ebbed in Lesbos, but it hasn’t stopped and anti-migrant sentiment in Greece and beyond has only hardened in the ensuing years, with the latest flashpoint on the EU’s Polish border with Belarus.

Greece has recently built a steel wall along a section of the Greek-Turkish land border and is intercepting boats transporting migrants from the Turkish side. It denies allegations that it is carrying out summary deportations of migrants reaching Greek territory but human rights groups say numerous such pushbacks have occurred.

Ahead of Sunday’s stop by Francis, human rights groups have stepped up their criticism of Greece’s treatment of migrants and of tougher migration policies among the EU’s 27 members.

Amnesty International said new EU-funded detention camps on Greek islands were in violation of Athens’ commitments to provide international protection to those in need.

“Under international and EU law, asylum-seekers should only be detained as a matter of last resort,” Amnesty said. “As we feared, Greek authorities are hiding behind the legally ambiguous concept of so-called closed-controlled centers to illegally deprive asylum-seekers of their liberty.”

The rights group asked Greece “to urgently withdraw this decision and lift the restrictions.”

Greek Migration Affairs Minister Notis Mitarachi defended Greece’s response in a statement Sunday, saying it had “selflessly” responded to the crisis in 2015 and was continuing to provide asylum-seekers with protection. But it demanded the EU do more to help front-line countries like Greece that bear a disproportionate burden while “those who exploit fellow human beings are rewarded.” 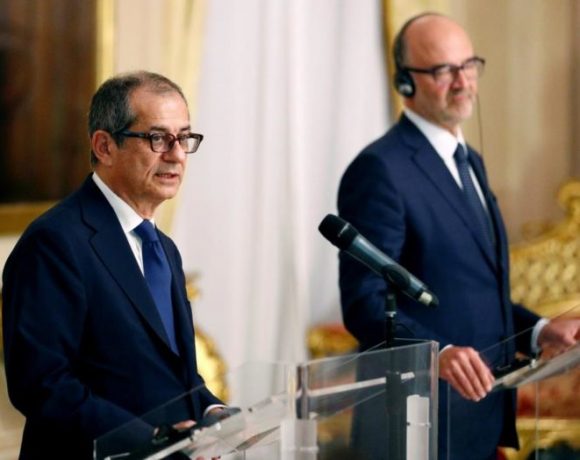 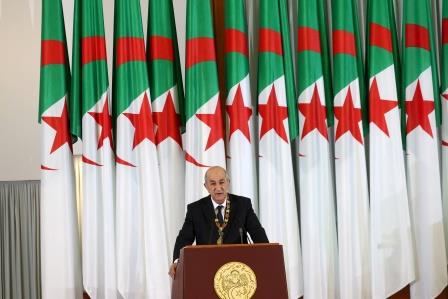 Algerians anxious for change as president is sick 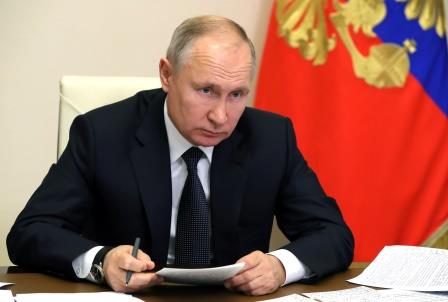