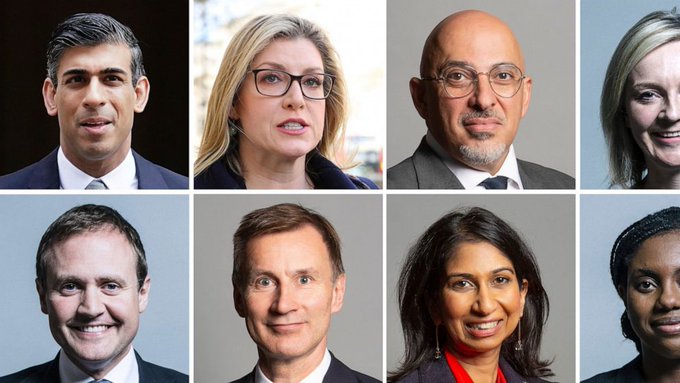 London(UK)- Like most of his predecessors as Conservative Party leader, Prime Minister Boris Johnson is wealthy, white and male. There’s a good chance his successor will be different.

The eight candidates running in a party election to succeed Johnson are four men and four women, with roots in Iraq, India, Pakistan and Nigeria as well as the U.K. The race could give the country its first Black or brown prime minister, its third female leader, or both.

With the first round of voting by Conservative lawmakers set for Wednesday, the bookies’ favourite is former Treasury chief Rishi Sunak, son of Indian parents who came to Britain from East Africa. Other contenders include Kemi Badenoch, whose parents are Nigerian; Nadhim Zahawi, who was born in Baghdad and came to Britain as a child and Suella Braverman, whose Indian parents moved to Britain from Kenya and Mauritius.

With Penny Mordaunt and Liz Truss also in the race, only two white men — Tom Tugendhat and Jeremy Hunt — are running.

Zahawi, who recalled coming to Britain at age 11 speaking no English, said “the Conservative Party has made me who I am today.”

But if the contenders reflect the face of modern Britain, the winner will be chosen by an electorate that does not. The next party leader, who will also become prime minister, will be chosen by about 180,000 Conservative members who tend to be affluent, older white men.

The slate of candidates reflects successful efforts to attract more diverse talent to the party and shake its “pale, male and stale” image, which began after former Prime Minister David Cameron became party leader in 2005. Cameron made a push to draft diverse candidate shortlists for solidly Conservative seats, an effort that has seen Black and brown Tory lawmakers elected in constituencies that are predominantly white.

The party’s attempt to attract aspiring politicians from immigrant backgrounds has succeeded despite a Brexit vote in which the winning “leave” side — championed by Boris Johnson — played on concerns about immigration.

“The Conservative Party is very diverse at the very, very top,” said Sunder Katwala, director of the equality think-tank British Future. “It’s a massive, rapid change, and it’s a level of ethnic diversity that has never been seen in any leadership field for any political party in any Western democracy.

Change has happened despite the Conservatives lagging behind the left-of-centre Labour Party in terms of overall diversity. Labour, which passed Britain’s first race relations act in 1965, has long seen itself as the natural home for ethnic-minority voters, as well as a champion of women’s rights. Half of Labour’s lawmakers are women and 20% come from non-white backgrounds; among Tory legislators, 24% are women and 6% belong to ethnic minorities.

But minorities in the Tory party have risen higher, and faster. Sunak, Zahawi and Javid all served in Johnson’s Cabinet in senior posts. Both of Britain’s female prime ministers — Margaret Thatcher and Theresa May — have been Tories, while Labour has never had a female leader.

The only British prime minister from an ethnic minority background was 19th-century leader Benjamin Disraeli, who came from Sephardic Jewish stock. He was a Conservative, too.

“Labour continues to regard minorities as groups to be protected or talked about a lot — but for whatever reason, it seems they can’t or won’t advance them on merit to the highest offices,” said Conservative commentator Alex Deane. “The conservative approach is to advance people on ability regardless of gender or colour and — guess what?— it works.”

If the candidates’ backgrounds are diverse, their views are less so. Johnson’s drive for a “hard” Brexit from the European Union, regardless of the economic cost, drove many pro-European and centrist lawmakers out of the government. Those who remain, of all backgrounds, are small-state, free-marketeers inspired by “Iron Lady” Thatcher.

Contenders have fallen over one another to promise tax cuts, painting Sunak as a left-winger because he has suggested that slashing taxes might not immediately be possible amid war in Ukraine and a stuttering post-pandemic economy.

Tim Bale, professor of politics at Queen Mary University of London, said the race was “a contest between different strains of Thatcherism.”

In part that’s because the candidates are wooing an electorate, members of the Conservative Party, that is significantly less diverse — racially, economically and ideologically — than Britain as a whole.

A study of political party membership by Queen Mary University of London and Sussex University, completed in 2020, found that 95% of Conservative members identified as “White British,” compared to about 86% of the population as a whole. Some 63% of party members were men, 58% were aged 50 or older and 80% were middle class or above.

Still, Katwala, who studies British social attitudes, is confident the Conservative electorate “will see the leaders through their politics and through issues” rather than through gender or ethnicity.

“What makes ethnic diversity normal in politics is when you’ve got it on the right, on the left and in the middle. “ 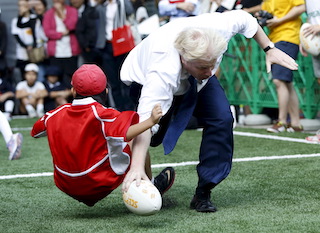 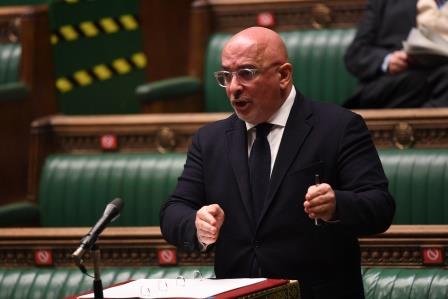 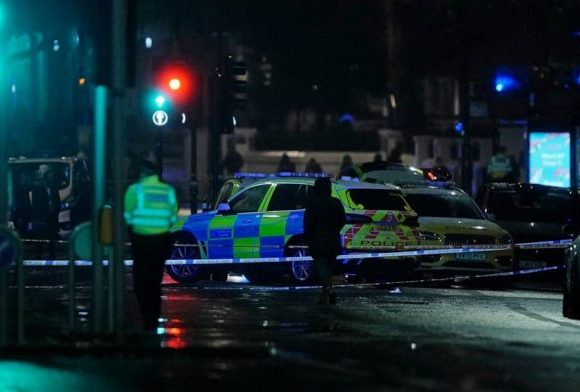