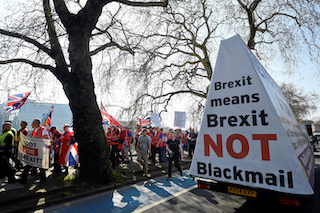 On the day that Britain was originally meant to be leaving the EU, large groups gathered in bright sunshine outside parliament waving Union Jack flags and chanting, “Out means out” – as the Queen song Bohemian Rhapsody was played on a loudspeaker with its famous lyric “Mamma Mia, let me go”.

Friday’s protest, a week after hundreds of thousands marched through calling for a second referendum, shows how divided Britain is over Europe three years after voting to leave the EU.

As the result of the vote in parliament filtered through to the crowds on Parliament Square, scattered cheers went up as some protesters viewed it as boosting the chance of a rapid departure from the bloc.

The mood of protesters ranged from satisfaction to despair.

“Excellent. We’re now on track for a ‘no deal,'” said saleswoman Louise Hemple, 52, standing in the shadow of Winston Churchill’s statue outside parliament. “And that will mean we’ll have complete control which is what we Brexiteers voted for.”

Hemple said she would continue to protest until Britain had left the EU because she did not trust lawmakers to do it.

“They’re in their bubble in there. It’s all about their vote, not our vote,” she said, referring to the 17.4 million people who voted Leave in Britain’s 2016 referendum.

Nigel Farage – the politician widely thought to have done the most to spook Britain&rsquo;s then government into agreeing to hold the referendum – addressed the crowd at the end of a 270-mile (435 km), two-week march from Sunderland, northeast England, to London.

“What should have been a celebration is in fact a day of betrayal,” Farage told Reuters. “There will be a lot of anger. I certainly have never known a time in my life when people have said such rude things about the political class, about the government.”

Earlier, about 1,000 Leave supporters had gathered at Bishop’s Park on the bank of the River Thames to march the four miles to parliament.

Among them was David Malindine, 63, a retired teacher.

“We need to remind the country that the majority of people voted ‘Leave,'” said Malindine. “This was the day we were supposed to leave, and Brexit has been betrayed.”

Many people said their central grievance was a political elite that doesn’t represent them.

One placard said: “Politicians worth their weight in cow dung.” Another said: “Parliament? A hive of scum and villainy.”

Labour Party politician Lisa Nandy – who opposed May’s deal – said that she and her staff were called traitors by protesters as she tried to enter parliament to vote.

Far-right Leave activists including Tommy Robinson spoke at a separate meeting nearby.

Robinson led the crowd in singing Rule Britannia. Propped on the stage beside him was a coffin with May’s face on it and the word “democracy”.

Some protesters dragged dummies wearing masks of May and Labour Party leader Jeremy Corbyn through the streets, leaving them outside the gates to May’s Downing Street residence.

Police said they were prepared for potential trouble, although the atmosphere was festive for most of the day with people drinking beer and eating sandwiches.

London’s police force said it had arrested five protesters as of 2100 GMT.

Many of the day’s marchers predicted the political elite will be punished if it fails to fully sever ties with Brussels.

Andy Allan, 58, who was carrying a red and white St George’s flag, predicted that there could be unrest modelled on the “yellow vest” protests that have rocked Paris for the last few months if Britain fails to leave the EU.

“It is absolutely disgusting what is happening,” he said. “Be warned – this is just the beginning of a mass uprising if we get betrayed by the politicians.” 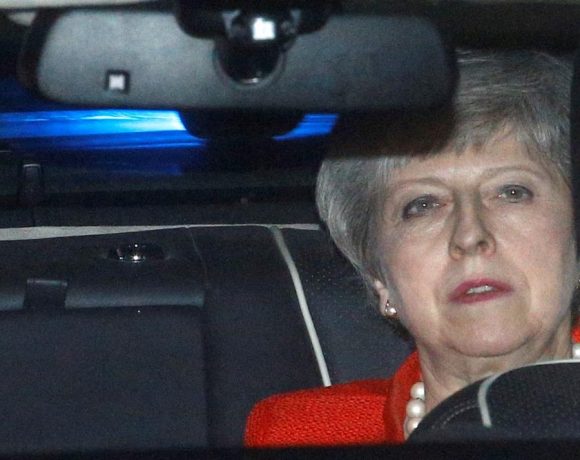 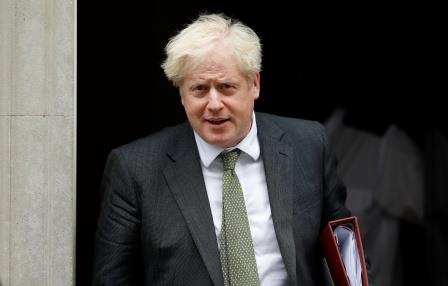 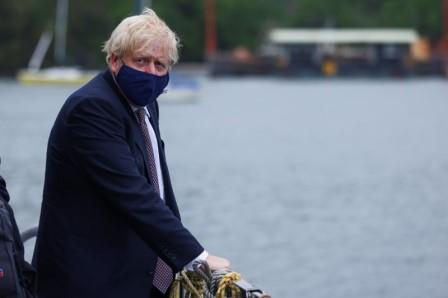